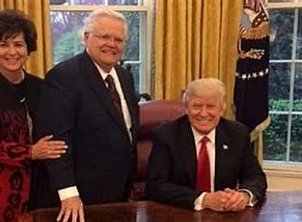 John Hagee and his second wife with president Trump.

Last week John Hagee Ministries and Cornerstone Church in San Antonio Texas allowed an event at their sanctuary. Michael Flynn, Mike Lindell,  Roger Stone, and many others in the political and religious realms. This event was part of the “Reawaken America Tour” organized by Clay Clark. This tour has sellout events all over the country. And that’s why this tour is using mega churches like Cornerstone to promote it. It’s marketed and targeted to conservative evangelical people who hold certain political and cultural views. General Michael Flynn made a comment that made the news headlines really fast. He said, "If we are going to have one nation under God, which we must, we have to have one religion,". Of course, that statement set a lot of folk’s hairs on fire who work in the media. Actually we all should be wary or any one person or group telling us we need one religion in this nation. I certainly wouldn’t want Cornerstone’s religion or their version of Christianity, or whatever that is, to run this nation. But that statement is not the worst of it. Later Mark Burns, an evangelical minister at Harvest Praise & Worship Center in South Carolina, led the group at this event in a “Let’s Go Brandon” chant.

Those of you who know me or have visited my Facebook page know I’m a political person. I listen to talk radio a lot while I’m working and I am a Republican voter and have been since 1980 when my first memorable presidential campaign and my first presidential vote was for Ronald Reagan. I voted for Donald Trump twice and would do it again. But I don’t wear MAGA hats or fly a Trump flag. Nothing against those things or those who take part, I just choose not to. When asked, I can talk politics with you for hours if that’s what you want but rest assured my views on politics haven’t changed much in 40 years and in that area I’m hard headed. When I assemble with the Church, I’m there to learn God’s word and to worship Him. I would get up and walk out if my preacher led a chant saying, “Let’s go Brandon”. The assembly is not the place.

One time I was filling in for a class teacher and the subject of the Kingdom of God verses the kingdoms of this world was brought up. I mentioned how if things didn’t get better in this country I may never vote again. In no time at all the class became hijacked and a political back and forth was about to ensue. I wanted to make the point that God’s Kingdom is the one we belong to and how it has never changed and will never change and how the world’s kingdoms never stand and always change, but it was too late. I opened a can of worms and boy did I learn a lesson. People will hear things that were never said when it comes to politics. One even came up to me after class and said, “If you talk about Trump people might not like it”. No name was ever mentioned. No political figure was ever mentioned and not even a party was ever mentioned by me. My mistake was saying in front of the class, “I may never vote again if things don’t get better”.

That “My bad” event was with a small congregation of Christians, no cameras, no political figures, and news organizations or social media outlets waiting to pounce at the first chance on someone’s remarks. These “mega” ministries have to know they are being recorded from the time the doors are open to the public until they are inside their homes. The world will use everything they say against them. In this case of being exposed by cell phones and other recorders with a chant of “Let’s God Brandon” being led by an evangelical mega church preacher It’s a good thing in my opinion. John Hagee for years has been blaspheming the word of God and bringing shame to the church and even denying Jesus came to be the Messiah the first time and claims Jesus will establish that role when He returns.

John Hagee himself is a very political figure. In many of his “sermons” he loves to re-tell the story of meeting president Trump and how he convinced the president to move the US embassy in Tel Aviv Israel to Jerusalem. He claims 2017 was the prophesied time because it was a Jubilee year for the Jews. The Jews actually debate that but that’s irrelevant to this article. Almost all of John Hagee’s sermons inset politics and “America” and liberalism verses conservatism. I know because like many other evangelicals I listen to them and debate with them and gather material to vent on my website, something I wish I had built years ago. The mega ministries are dangerous and are called “mega” for a reason. While a local congregation of Christians might have 2 to 5 or 6 hundred members, these mega ministries have 10s of thousands of members with budgets the size of a small city. They are on network and cable TV, YouTube, Rumble, Facebook, Websites, bestselling books almost anywhere you can think of. Some have their own worldwide networks such as Daystar and TBN. These people wreak havoc on the gospel and the Church by many means. John Hagee Ministries mixes politics with a duel covenant theology like no other.

Below is a link to “blackchristiannews.com” with a quote from Matt Hagee embedded.  Matt is John Hagee’s son and heir to the ministry. Some of the new Hagee Ministries videos begin with John passing the torch to Matt. It’s as if a congregation is under the rule of a monarchy and not Christ. Anyway Matt says this,

Later a video was leaked that showed Matt opening the event and so he had to issue another statement that read,

“I was invited to welcome the crowd where I thanked veterans for their service and thanked the crowd for their commitment to their faith. I deeply regret, and ask forgiveness, for what took place in the Cornerstone sanctuary as a result of my oversight,” he added. “In the future, Cornerstone Church will ensure that organizations using our facility are an appropriate reflection of our mission and vision.”

At least he asked for forgiveness but that still doesn’t tell the whole story. These people who attended and took part in this event are no strangers to the Hagee Ministry. Most of them are the “who’s who” in the Pentecostal/Charismatic movement. Scroll down the page of this link and you can see the names and faces of some of the participants. ReAwaken America Tour - The ThriveTime Show

The apologies and corrections don’t carry much weight with me. Hagee Ministries for decades have been doing these type political events mixed in with their religion and congregation.  Look at this article for example written by John Hagee. This could be from one of his sermons. It’s titled “Donald Trump Keeps His Promises”. Articles (jhm.org)  Notice this is from the Hagee Ministries Official page and not his personal page!

The people chanting “Let’s Go Brandon” at the event, most were and are Trump supporters and some like Michael Flynn worked for him. Again, I voted for Trump and would again, but my political views is no place for the assembly and vulgar chants certainly don’t belong in the assembly. Matt and John Hagee cannot distance themselves from this event and introduce it and allow it in their assembly auditorium and spend the rest of their time during the year endorsing the same things and preaching the same things this event encouraged only to claim “Hagee Ministries does not share their views”. Sure they do, these are their like minded friends and colleagues!

Politics is a big part Hagee Ministries. I agree with much of the politics because they are Republican in nature. But the assembly is to gather together to worship God and remember Jesus died for our sins and gave us the word to obey and live by and edify each other in singing and prayer.

John Hagee even founded CUFI (Christians United For Israel). It is a multi-million dollar organization now. Many sermons, most in fact, preached by John Hagee, he rarely fails to plead for money on behalf of Israel claiming Genesis 12:3 demands it by blessing Israel and you’ll be blessed. Never mind Israel wasn’t even in existence when God gave that oath to Abraham. As I said above, Hagee brags a lot about meeting with Trump to convince him to move our embassy to Jerusalem and he would fulfill prophecy. No such prophecy exists, but scripture that doesn’t exist never stopped a false doctrine anyway. I’m going to end here and my next article I will use scripture to explain why politics and the Kingdom truly we belong to should not be so carelessly mixed. But to give you some examples of a John Hagee sermon here’s a couple of links.